After being forced by COVID-19 restrictions to go on without an audience for much of the last year, the Oregon State University Dam Cancer Gymnastics Meet welcomed fans back to the Gill Coliseum on Feb. 5.

Attendees streamed into the coliseum excited to not only cheer for the competing OSU and Arizona State University gymnasts, but also to support the cause of cancer awareness and early cancer detection. Many fans demonstrated this by wearing bright pink t-shirts with slogans that read “Dam Cancer,” “Pink Out!” and “Beaver Fans Wear Pink.” During the opening ceremony, the video boards showed OSU gymnasts holding up signs with the printed words “I Believe for …” followed by the handwritten names of loved ones who had been affected by cancer. Afterward, fans who had filled out similar signs when they entered the coliseum raised theirs in the air in solidarity.

For this meet, the OSU women’s gymnastics team put aside the color orange to wear the colors and symbols of cancer awareness. The women sparkled in hot pink and black leotards. Each gymnast also wore a small temporary tattoo of a pink ribbon at the base of her neck.

In their hair, the gymnasts wore two different colored ribbons. They all wore zebra-striped ribbons in honor of their head coach, Tanya Chaplin, who is a survivor of neuroendocrine tumors. The second ribbons were in the color of a cancer experienced by a friend or family member for whom the athletes dedicated their performance that night. 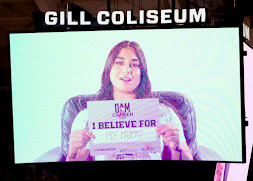 “We even have some coaches who wore different colored ribbons as well,” said Head Coach Chaplin. In addition to her own cancer experience, Chaplin has had close family members who have been affected by cancer. “So it’s near and dear to our heart to promote it and to get the awareness out,” she said.

Jade Carey, freshman OSU gymnast and Olympic gold medalist said, “This is a really important meet. It was bigger than gymnastics tonight and we wanted to go out and show support for everyone going through cancer. Just anyone touched by cancer really. We just wanted to go out and fight for them and do it for them because it’s just really special to be able to dedicate a meet to someone”

“I know a girl back home who was diagnosed with Hodgkin’s lymphoma as a child and I would visit her in the hospital. She is a gymnast. I did it for her tonight. I wore gold [ribbons] for childhood cancer and we all wore zebra [ribbons] for Tanya [Chaplin],” said Carey.

The Dam Cancer Gymnastics Meet is one of a series of Dam Cancer events and competitions that have been held since 2005 as a way to foster cancer awareness, encourage early cancer screening, and raise money for local non-profit cancer support organizations. The events were originally organized by the Corvallis Clinic Foundation and OSU. In the past, each major athletic women’s sport at OSU held one Dam Cancer event per season. These have included women’s volleyball, soccer, basketball, golf, and swimming as well as gymnastics.

The pandemic brought new challenges to holding the Dam Cancer events. Due to COVID-19 restrictions many collegiate sporting events were postponed, canceled, or went on in empty stadiums. Eventually, the Corvallis Clinic Foundation decided to stop organizing the events altogether. The Willamette Valley Cancer Institute and Research Center (WVCI) took up the responsibilities for organizing the events in their place, but according to both Head Coach Chaplin and Christy Curtis, the WVCI oncology Liaison and Marketing Coordinator, the Dam Cancer series is still very much in transition.

“It’s a new world so we are still trying to figure out things that we can bring to the community,” said Chaplin. 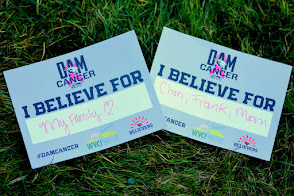 For example, they are still working out how to re-incorporate fundraising and develop new ways to honor cancer survivors. Previously, cancer survivors were welcomed to walk onto the performance floors and playing fields to be cheered and encouraged by fans. With the rise of the covid virus, however, it is more dangerous for cancer patients to be around crowds.

According to Curtis, the “I Believe for” signs were created as a way to safely honor survivors. The signs are a way for fans “to at-a-glance see how many people are touched by cancer. It has a pretty strong impact,” she said.

Another concern with allowing non-athletes on the field is the risk to athletes. “We have to make sure that all of [the athletes] are safe, too. So they’re not having many interactions until the season is over,” said Chaplin.

Despite the challenges behind-the-scenes, fans appreciated the message that the events promote. Judy Rinkin, 79 and her husband of 58 years, Mike Rinkin, 81, are diehard Beaver fans who have been to many Dam Cancer events over the years. Both were at the meet on Saturday and wore pink in support.

“The cancer events do a great job because they bring [cancer] to the forefront. I remember as a kid we only whispered about cancer, but now we can talk about it. And we need to!” said Judy Rinkin. “[Cancer] is not something to be ashamed of. It’s not something [cancer survivors] choose. It’s just something they get.”

In addition to supporting the Dam Cancer cause, fans and athletes alike enjoyed the competition and spectacle of young women appearing to defy gravity. Everyone cheered and marveled at the OSU and ASU gymnasts’ performances. 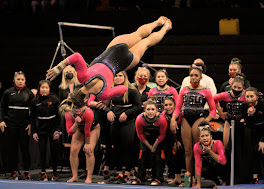 “I just love gymnastics because these young women compete against themselves and they are there being watched by the world,” said Judy Rinkin. “And those girls can tumble so high. Oh my goodness it’s amazing!”

The climax of the meet for both the Rinkins and the rest of the fans was Carey’s performance on the uneven bars. When it was announced that Carey had earned the first perfect score of her collegiate career the coliseum reverberated with the sound of the audience leaping to their feet and roaring.

With this event now under their belt, WVCI and OSU are looking forward to collaborating on many more Dam Cancer events. According to Curtis, their main objective for the first year back is “engaging in our community and raising awareness for cancer. Hopefully we’ll just keep getting better at that!”

Why: To compete and raise awareness of cancer and early cancer detection

Outcome: OSU prevailed against ASU 197.374 to 196.500. Freshman Jade Carey won the all around with a score of 39.825 and made the first perfect score of her collegiate career with her uneven bars routine. The Dam Cancer events are transitioning after a year of covid and a major change in organizers, but still succeeded in bringing greater awareness for cancer.